Text: Luke 9:51 “When the days drew near for him to be taken up, he set his face to go to Jerusalem”.

Living prophetically, as individuals and as a congregation: how should we do it? Put another way, how shall we live out our calling as disciples of Christ and God’s agents of all things good and pleasant in the world? Let us start with a little story.

One of the weirdest things the Romans enjoyed doing was, watching cruelty at its purest form in the sport of gladiatorial combat, where gladiators fought wild animals, convicted criminals and each other in combats so violent that, death was often the end result. But this blood-letting sport came to an end, thanks to efforts of a little-known monk, by the name of Telemachus. The story of Telemachus is found in the writings of the ancient, church historian, Theodoret, who was also bishop of Cyrrhus in Syria.

According to Theodoret, Telemachus was a small man and a desert monk from the East. One day as he began his day in reflection, it suddenly occurred to him that he had been selfish; the ascetic life was just for him. He was not serving his Lord, because he was not helping anyone, and he was not helping to spread the gospel. He felt called to where people were so he could help those that needed his help. So he left his ‘hole’ in the desert and began the journey to civilisation; he decided to go to the centre of the empire, to Rome.

When he arrived in Rome, he heard the noise coming from the Coliseum. So he headed straight to the Coliseum. When he arrived, he was horrified at what he was witnessing. So he went down to the arena and tried to stop the fight. The crowd was not happy, and signalled to have the intruder killed. The prefect of Rome ordered the gladiators to kill Telemachus and they proceeded to kill the small monk. It was only then that the people and the prefect of Rome realised that they had killed a holy man, and they were horrified by this knowledge. After he was briefed about the incident, Emperor Honouris, a Christian, ordered the cessation of the sport. January 1 in the year 404 marked the last known gladiatorial games in Rome.

Telemachus had been a monk, spending time in the desert fighting the ‘devil’, then realised the real action was in the heart of the empire. He went to Rome and helped bring a violent sport to an end, though he was killed doing so. Something similar is happening to Jesus in the assigned gospel reading for today.

Up to now, Jesus has not left the familiarity of the Galilean region. He had been operating from Capernaum, and had crossed to the other side of the Galilean lake. The farthest he had travelled away from his base was to Tyre and Sion on the Mediterranean coast. But in today’s reading, he has realised that, the time has come for him to bring his message to the Jerusalem, the centre of Jewish life, Jewish culture and Jewish religion; he has to be at the Temple, his Father’s house. That is where the real action is taking place. So … “he sets his face to go to Jerusalem”.

As shown on the map, the most direct route to Jerusalem from Galilee would be through Samaria, which sits between Galilee on its north and Judea on its south. And Jesus has decided to take this route. But there are risks, because, as many might have learnt from other sources, the Jews and the Samaritans were not the best of friends. Though they are the same people, they had many disagreements in matter of religion. Chief among them was the place of worship. For the Jews, it was the Temple on Jerusalem’s Temple mount; for the Samaritans, it was the temple on Mt Gerizim. 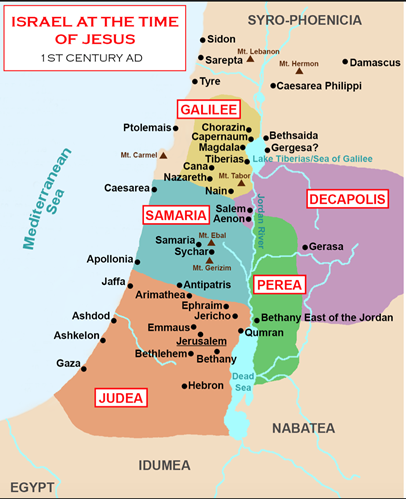 To no one’s surprise, when Jesus sends people ahead to prepare the way, the advance team was not welcome. Luke says the reason was, because Jesus has ‘set his face to go to Jerusalem’. It seems like the Samaritans are unhappy that Jesus wants to pass through their land, but he refuses to, at least, acknowledge their place of worship, Mt Gerizim.

The disciples are offended and respond in a not very Christlike manner. John and James ask Jesus if they should call down God’s fire to burn the Samaritans.

As expected, Jesus tells them off and they move on to the next village.

As they continue, some of the people that are travelling with them start to quit. They say they would like to follow him, but they have other responsibilities.

In this short passage and Telemachus story, we able to see the different ways in which people respond to the call of living prophetically.

We have Telemachus and Jesus who are totally committed to the prophetic life, to become God’s agents of all things good and pleasant in the world. They know what God has called them to do. They give themselves time to prepare for the call, and when the time comes, they move forward, with eyes, minds and hearts all focused on the destination.

And then we have people, like the disciples that are not so sure about themselves. Just a small irritation and the response is retaliation of unequal proportion. They seem to be so full of themselves, thinking that others should serve them. They are still a long way to understanding the ways of living life prophetically.

The Samaritan village that rejected Jesus offers a different type. They are so set in their own ways. They would have been happy to accommodate Jesus and his party, had Jesus shown some respect to their understanding of God. In a sense, they have a point, but in their unwillingness to consider a different view, they miss out on God’s message of salvation.

The fact that another Samaritan village hosted Jesus reminds us that we should never stereotype people, for we are all individuals despite genes, skin colour, ethnicity and religious beliefs.

The people that say they want to be disciples, but have other responsibilities that they want to attend to, represent most of us. It shows that it is not easy to live as Jesus did, and that we need to assess our situations, whether we are well suited to a particular call or not. We need to remember that God has blessed us with different gifts, and we should feel good with whatever we may end up doing, so long as it brings glory to God.

So the key elements in living life prophetically, whether as individuals or a church, are first, listen intently to the voice of God; second, assess our gifts and their suitability; third, prepare well and then, finally, move forward towards the destination with all our energy.

We see this in Elisha, in the passage that we read in the book of Kings.

How can we live life prophetically, as individuals and as a congregation, or how shall we live out our calling as disciples of Christ and God’s agents of all things good and pleasant in the world?

The story of Telemachus and the passages that we read from the assigned readings for today tell us how we can do it, as well as what we should avoid.

We should commit ourselves to God’s call upon us, prepare ourselves well, and wait for God’s time. When that time comes, set our eyes on the destination, and move forward towards the goal.

We should avoid impulsive responses; we should be open minded and listen to other voices out there, and not make excuses when we cannot make the commitment. Instead, identify a new destination as God guides us through life’s difficulties; move forward; find new ways of knowing and doing; be sensitive to the needs of others; and apply yourself to the cause.

Living life prophetically is never easy, but it is an exciting life to live with its surprising dynamics. In the end, heaven is its reward and God’s name will be glorified by it.

For the glory of God.